beautybliz.com / Why Did This Model Glue Mirrors to Her Face?

Why Did This Model Glue Mirrors to Her Face? 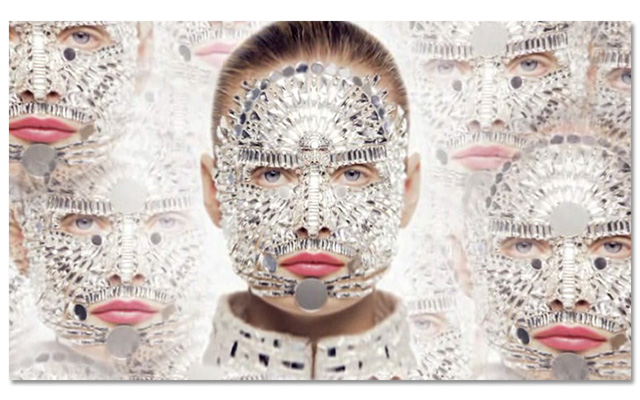 We've spied Latvian model Inguna Butane in ads for Bergdorf Goodman, Armani Jeans and Dolce & Gabbana. And she's made her rounds on runways in Milan and Paris for several seasons. But her makeup has never included adhesives, glues and broken glass. Today marks a first - the first time we've seen mirrors glued to the face of a model.

Belgian makeup artist Peter Philips, the Creative Director of CHANEL Makeup, conceptualized this look as part of a video short (watch it below) to announce new lipsticks in the CHANEL Rouge Allure line. Inspired by the sparkle, glint and glimmer of CHANEL's Paris Bombay show last December, Philips sought to master a mirrored face. "The psychedelic aspect fit well with the Indian theme," Philips said.
Are we shocked to see Philips cover a beautiful face with glass and glue? Nope, not one bit. Philips got his start studying graphic design, then moved to Antwerp's Academy Royale de Beaux-Arts. And once he became a makeup artist, he developed a reputation for laser-like precision and the incorporation of atypical materials like feathers, fabrics and pearls. His unique blending of fantasy and artistry with stellar training makes Philips one of the most celebrated makeup talents in the beauty industry.

“I applied pieces of crystals and mirrors to the face.  I love the sparkling, hypnotizing effect.”   Peter Philips, Creative Director of CHANEL Makeup

I've seen marathon makeup sessions over the course of my career as a beauty editor, some requiring several hours of painstaking application to the face and body. But never several hours on the face alone. It took Philips four hours to individually apply all of the pieces of crystals and mirrors to Inguna's face. The composition was created around the central mirror that's applied on the forehead as a third eye, surrounded by a peacock-tail motive. The only touch of color is the changing lip shades, which highlights the bold, beautiful new Rouge Allure hues, Pimpante, Excentrique, Enjouée, Exaltée, Palpitante.