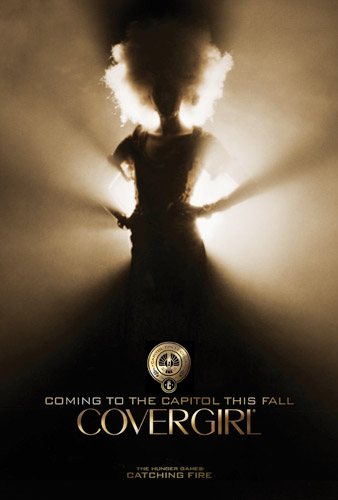 The anticipation for The Hunger Games: Catching Fire is officially at an all-time high after CoverGirl announced their exclusive beauty partnership with the Lionsgate movie last week. This is the makeup brand's first-ever major movie sponsorship and they are rollin' out the big guns for this one. In honor of the partnership, CoverGirl will launch a "first-of-its-kind creative advertising campaign inspired by the film," which will include a bundle of new products for their - drumroll please - Capitol Collection! We're kind of excited!

"With The Hunger Games: Catching Fire partnership, we wanted to redefine cosmetics’ relationship to film with a fantasy-meets-reality beauty experience," said Esi Eggleston Bracey, VP and General Manager of Global P&G Cosmetics. "The film inspired CoverGirl campaign coming out this fall truly will bring beauty transformation to life in an aspirational, dramatic fashion.  All of us at CoverGirl were captivated by Suzanne Collins’ novels and the first film, so we’re thrilled to collaborate with Lionsgate on such a bold beauty partnership with the release of The Hunger Games: Catching Fire.”

The makeup department even used CoverGirl products on set to create the outstanding couture looks on the cast, which is why we're sure the new Capitol Collection will be true to the beauty of the fictional world. We can't wait to see what CG has planned!