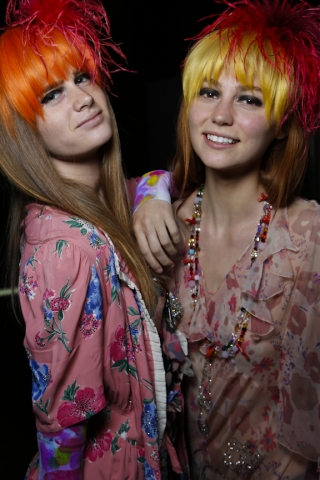 In much the same way that you might jazz up an ensemble with a vibrant belt, hairstylist Odile Gibert crafted vivid clip-on bangs to play up sleek blowouts at Libertine. Each set of bangs featured longer piecey sections along the sides, adding a plummage effect that jived with red feather headpieces. The stringy feathers could have been snipped from Animal fromThe Muppet Show.

Odile used Kérastase Paris products to create the blowouts. First, she prepped damp hair with Kérastase Ciment Thermique and Kérastase Mousse Substantive to give the hair texture. Then she blew hair dry using a round brush. She sprayed on Kérastase Double Force Hairspray, lightly fluffing hair with her fingers for a slight tousled look. Then she clipped in the bangs and pinned on the feather headpieces.
If you're not quite ready to take a Katy Perry plunge into hair color, here's your no-commitment way to dip a toe in.

“I think she hangs out in opium dens in Moscow or Shanghai or Paris, but in the 1920s,” said Libertine designer Johnson Hartig of his muse. 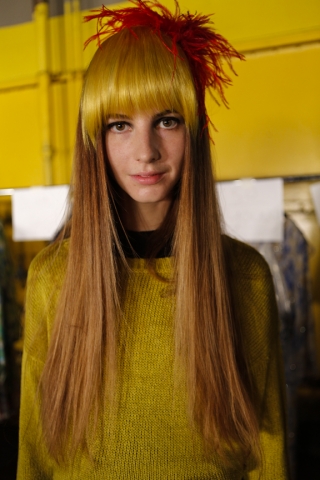