beautybliz.com / India in the 60s at Marchesa Spring 2013 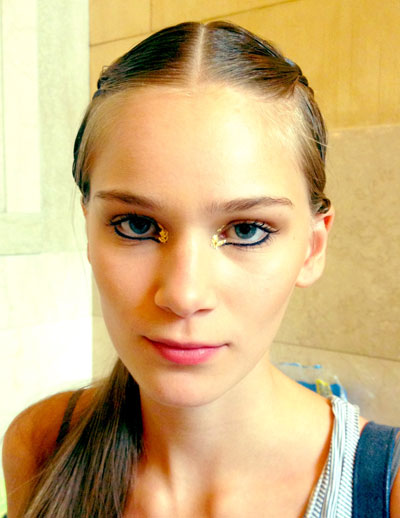 The look backstage at Marchesa may have been quite simple, but it made a huge statement. The inspiration: India in the 60s. Talia Showbrook for Laura Mercier created a nod to the 60s "without being too literal." "I've seen other shows and the 60s have been very much an influence this season," said Talia. "But the whole thing about Marchesa is that whenever they take an influence, they make it their own. And that's what I wanted to do with the makeup - make sure it wasn't a literal take on the inspiration." For the face, she created a "really bare, slightly sculpted" look. The lips were coated with tinted lip balm. But it was the eyes that really made us gasp. She lined the lower lash line with Tightline Cake Eye Liner in Black Ebony eyeliner, followed by a coat of black Long Lash Mascara. It wasn't right at the water line, but a bit underneath. Then, Talia took gold leaf and placed it at the inner corner of the models' eyes. We couldn't believe how such a small factor can make a beautiful difference. 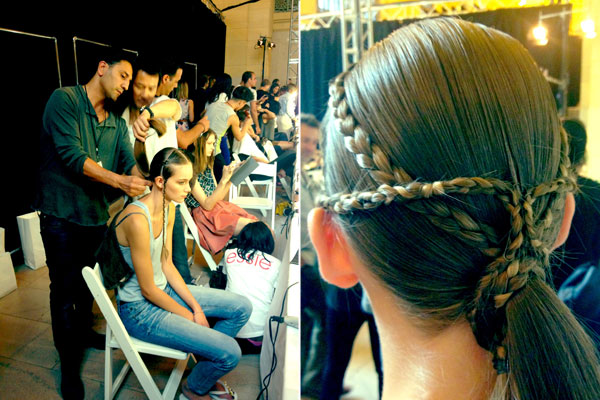 The Indian style continued over in hair where Renato Campora for Fekkai created an interesting take on a simple ponytail. He parted the hair in the middle and at the crown to create three sections. The two front sections were split in half and Renato created four, tight braids. He, then, brought the braids back into the ponytail while criss-crossing and swirling them on the head. "It's a very graphic look for Marchesa," said Renato. "you see the lines int he head, the shine and the dry ponytail. The braids look more like an accessory to the hair."

For the nails and toes, Michelle Saunders for Essie used a cool technique to reveal the true color of Essie's Luxedo - a deep, dark eggplant. On the runway, with all the lighting and flashes, Luxedo could look quite black in photos, and Michelle didn't want that. So, she applied two coats of Ballet Slippers first, followed by one coat of Luxedo. This way, the color looks more purple rather than black. Cool, right?