beautybliz.com / The Proenza Schouler Girl is Back for Another Season - NYFW Spring 2013 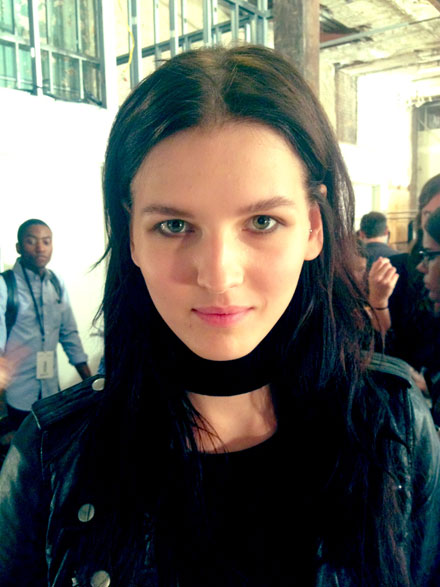 The Proenza Schouler girl is always so effortlessly chic. This season, Diane Kendall and Paul Hanlon wanted to keep the look simple and carefree to keep the beautiful collection in the spotlight while making the girls look cool and edgy. The look made a statement, without being too finished.

"It's the same girl, but with a more dangerous progression every season," said Paul Hanlon who created the hair look with Fekkai. "The collection is beyond, and on my behalf, you don't really need to do that much more." He created "stringy" hair with wave spray and a diffuser, and just "mushing it around" with his hands. "The models have these collars on their neck and the designers had the idea of having hair that looked like the models slept in the collars and had this natural mark in their hair the next morning," said Paul. "It's a very unwashed looking, dirty hair."

The same idea went into the makeup. "This is the regular Proenza girl," said Diane Kendal who worked with MAC Cosmetics to fashion the "cool girl" makeup. She applied a light foundation, brushed up the brows and penciled them in. Then, she lined the bottoms lids with a dark brown eye liner followed by a line in the crease which was later smudged. She used a little bit of blush on the cheek, no mascara, and nothing on the lips. "It's the idea of doing something edgy," said Diane. "That's why we did a line underneath the eye and kept the rest of the face very natural."

The natural look continued over in nails, where Marian Newman for MAC Cosmetics "took nude as far as it can go - by making it look like skin." Marian created the finish by just playing around with different formulas. "It's not a color," she added. "Just a cross between a matte nail and a glossy nail." To get a similar effect at home, Marian suggests gently buffing the nail and rubbing some cuticle oil on top.