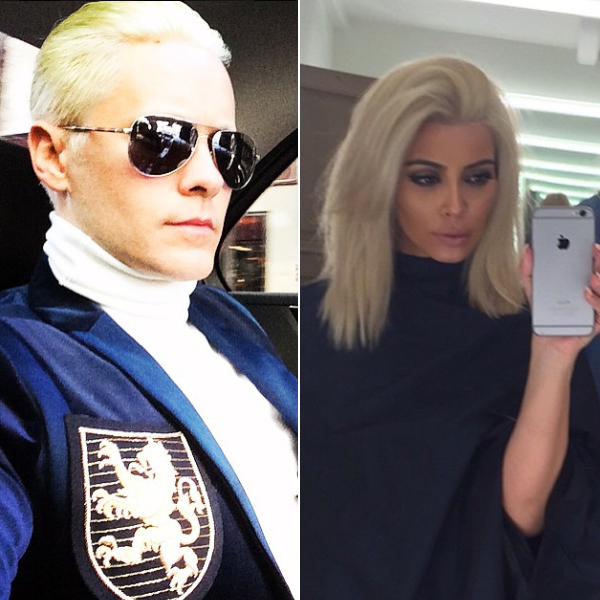 It’s a big day for celebrity hair makeovers. First, Kim Kardashian practically broke the internet again by unveiling new, über-blonde locks. But wait, there’s more: newly shorn Jared Leto is a platinum blonde now, too. Apparently it’s the latest incarnation of his ongoing Joker makeover for the upcoming Suicide Squad film. As for Kim, her new hair was inspired by Kardashian glam squad makeup artist Joyce Bonelli, according to a post on Instagram. (Also, major props to colorist Lorri Goddard, who took Mrs. West from black to blonde in one try.)

So I went platinum!! I have the best team! Thank you to @joycebonelli for being my inspiration and introducing me to @GregoryRussellHair who cut my hair & put this team together! Thank you @LorriGoddard_ who dyed my hair & got this color in one try! Not an easy task!

A photo posted by Kim Kardashian West (@kimkardashian) on

So, who looks better as a blonde? Our money’s on Leto, but only because he’s been down this road before. Remember how creepy he looked in Fight Club?