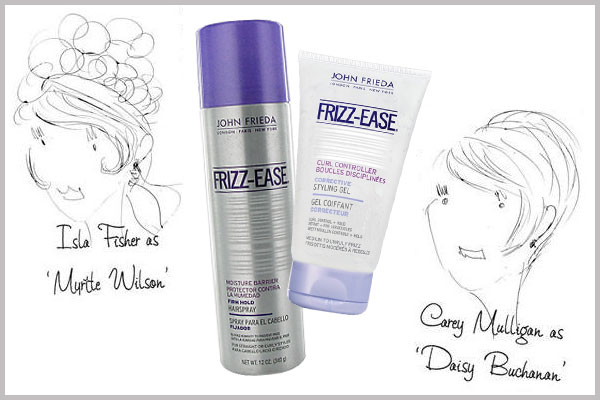 The anticipation of Baz Lurhmann's The Great Gatsby has been at an all time high this past month. We were especially excited to see the beauty and fashion of the 1920s in the film - and it obviously did not disappoint. Hair Designer Kelly Warn was the mastermind behind the hair looks for the entire cast of the film. (Don't you wish you could be her for those few minutes of Leo time?) She worked closely with Baz Lurhmann and costumer designer Catherine Martin to come up with a "contemporary twist" on the hair looks of the Jazz Age.

"The 20s have been done so beautifully in so many films," said Kelly. "After discussions, we decided to keep a modern twist, that we'd do our own interpretation of the 20s."

When it came to Daisy Buchanan's 'do, Kelly was inspired by Louise Brooks' 1920s style with an updated version of the classic bob. Hair accessories, as seen on Myrtle Wilson and Daisy Buchanon, also played a major role in the hair looks.

Jay Gatsby's outrageous parties came to life on the big screen and Kelly and her team had to style a whopping 300 female extras with - you guessed it - fingerwaves. In order for the styles to stay put during the many dance scenes, Kelly used John Frieda Frizz-Ease Curl Controller Corrective Styling Gel.

"The girls could dance - and they were brilliant dancers - even do cartwheels, and their hair wasn't going anywhere," said Kelly.

Another obstacle Kelly had to face was creating styles that held up in 3D. She had help from John Frieda's Frizz-Ease Moisture Barrier Hairspray to keep stray hairs in place. "It was a really good standby," she added.

If you haven't already, we urge you to check out The Great Gatsby. Even if you weren't into the book, the visual, soundtrack, costumes and hair will certainly be worth your while.