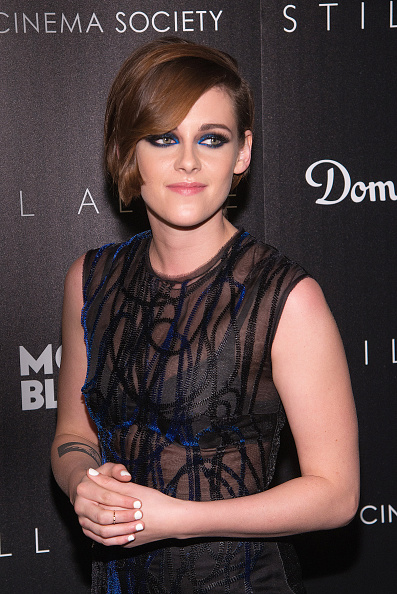 We’re so used to seeing Kristen Stewart in jeans, T-shirts, Chucks and baseball caps that when she steps out looking super glam, we have to do a double-take. Last night, she attended an event with her Still Alice co-stars, Julianne Moore and Kate Bosworth, with the most insane black and blue smoky eye. While everyone was freaking out over Bosworth’s big hair chop, our eyes were mesmerized by makeup artist Beau Nelson’s stunning work.

“For Kristen’s eyes, I used Chanel Stylo Yeaux Waterproof Long-Lasting Eyeliner ($30) in Noir Intense and Marine on her lid in place of cream shadow, and then applied Chanel Soft Touch Eyeshadow ($29.50) in Ebony over it,” he said. “I followed with Chanel Stylo Yeux Waterproof Long-Lasting Eyeliner in Bleau Métallique over the black, making it the most intense on the inner corners.”

We’re not usually advocates of matching your eye shadow to your dress, especially if it involves a color as bold as blue, but Stewart’s navy smokies were just dreamy. Nelson was able to perfectly match the makeup to the blue details in her sheer Roksanda dress for a unique and edgy result. Kudos, Mr. Nelson!