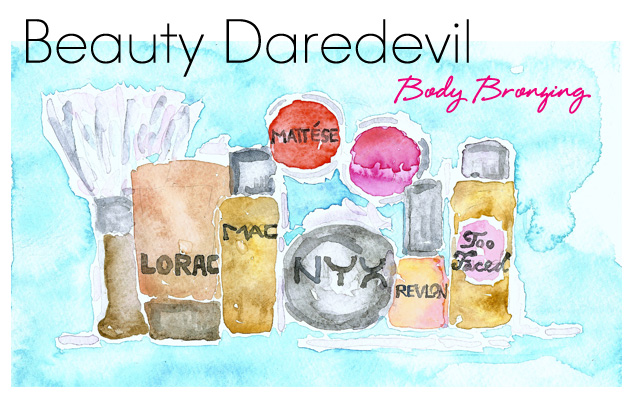 In our Beauty Daredevil series, we convince an intrepid reporter to try an experiment that we're too chicken to test ourselves. For this installment, contributor Jane Kirby gets inspired by classic actress hairstyles and travels around New York City wearing wigs to emulate their looks.

When the summer season began, I was excited to try to get a tan. Yet, after constantly hearing about the dangers of sun exposure, I decided to try out three different cosmetic looks.

The first makeup look was from the Michael Kors Fall 2012 runway. The designer was inspired by women from the 1930s who didn’t wear much makeup except for a breezy swipe of red lipstick. It also captured the American sportiness of a woman who had been on safari, or had a sexy après-ski windburn face. For the ‘tan’ I used NYX Matte bronzer powder in MBB03. a tan shade. Makeup artists at this collection applied red pigment to the cheeks and jawbone. For the cheeks and lip I used Mattese red blush in Claret with Vaseline for heavy shine.
The second makeup inspiration was Rodarte Fall 2012. Designers Laura and Kate Mulleavy also wanted the look to be healthy and outdoorsy but edgy. The cheek bronzer was heavy and intense, accompanied by a twist of a pink accent on the eye and lip. I used NYX Tango With Bronzing Stick on the cheeks and Make Up For Ever powder blush in Neon Pink #75 on the eyes and lip.

After experimenting, I found using bronzer a shade darker than your skintone results in a deep, rich tan instead of the dreaded fake orange.

For the extreme full-body tan look, I tried liquid and powder bronzers. I used Lorac Tantalizer Body Bronzing Luminizer , MAC To the Beach Body Oil and Too Faced Royal Oil Coconut Oil Body Bronzer. For extra shimmer, I dusted my shoulders with Victoria’s Secret Beach Sexy Bronze Body Powder Shimmer. To complement my new fake tan, I applied several coats of Revlon Nail Enamel in Gold Coast, a gold shimmer polish.
The only bronzing dangers are: You can end up smelling like a human coconut (several products are heavily scented).  Also, both liquid and powders rub off on clothing, chairs, and pretty much anything else you touch.