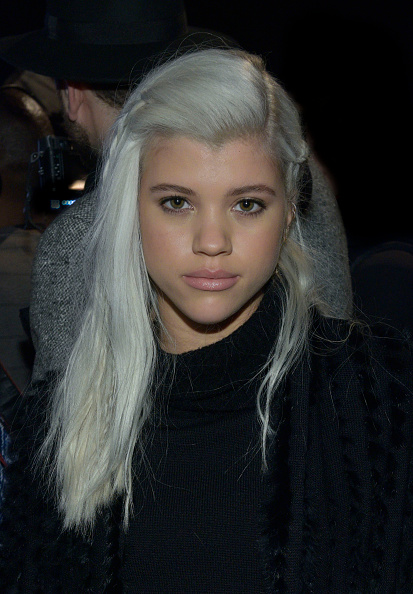 This NYFW, I’ve noticed a lack of epic braids coming down the runway. I mean, besides the mother of all plaited looks at Mara Hoffman’s show by TIGI US Creative Director Thomas Osborn. (Shout out to Osborn for creating two of my favorite hair looks this season.) I may not be getting my braid fix on the runways, but I am getting it from a certain 16-year-old celebrity sibling. Sofia Richie, Nicole Richie’s uber cool little sis, is really killing it in the plait department during her time in NYC and I just can’t get enough of her awesome style. Yeah, I said it, I’m taking hair inspo from a 16-year-old. I am not ashamed.

First of all, the color. Baby Richie has definitely taken notes from Nicole’s chameleon hair looks. Her platinum locks often switch between a bomb gray and an icy blue – two looks I’ve dabbled in myself. But back to the braids. On Sunday, she attended the DVF show with her hair in a sick cornrow mohawk with a side of baby braids. The rest of her hair was left down, resulting in a punk look to balance out her preppy skirt set.

Here is a closer shot of the side. Everything. After some Instagram stalking, I found the woman behind this insane look: hairstylist Angela Calisti of Angela Calisti Salon in Astoria, New York. Remind me to book an appointment with her ASAP.

Calisti’s work doesn’t end there. Yesterday, Richie posted another braided masterpiece by the stylist: a series of braids running down the side of her head. The plaits stopped right at the ear and were tied with small elastics. The rest of Richie’s hair was left down and tucked behind her ear to reveal her lust-worthy lineup of bling.