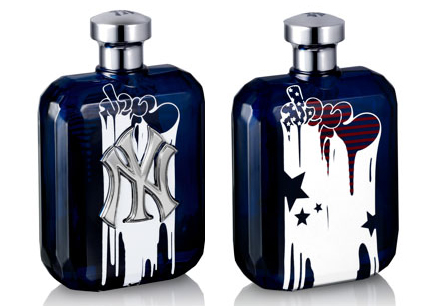 Baseball season: the time of the year where you'll find your guy on the couch watching games for what seems like every single day and night. Whether you support his diehard obsession or not, the man in your life deserves a little spring treat. If he's a Yankees fan, this limited-edition bottle of the New York Yankees Eau de Toilette, designed  by famed graffiti artists Mint & Serf, is sure to give you major brownie points.

The Cloudbreak Group, co-developers of the New York Yankees fragrance, asked Mint & Serf to re-imagine the Yankees logo for the front and back of the bottle. The outcome was a cool graffiti design with a unique dripping effect, something the duo is known for.

"People who know us can tell you that we are both diehard New Yorkers. From Astoria, Queens to Sheepshead Bay, Brooklyn to East Tremont Ave in the Bronx to Victoria Blvd in Staten Island, graffiti opened us up to almost every neighborhood in New York City. We live and breathe New York City," said Mint&Serf. "When it comes to the symbol of New York, there is nothing more iconic and recognizable than the New York Yankees; to think that graffiti we created on the streets of New York will be immortalized alongside the New York Yankees logo is an honor.”